Kato Mukasa’s talk on modern Humanism in Africa has unfortunately had to be deferred due to circumstance beyond our control. Watch this space for its reappearance a little later in the year! 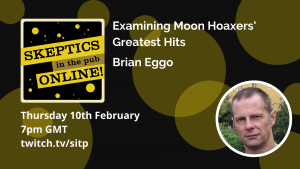 Just over fifty years ago we landed on the moon … or did we???

We really did. Honest.

Unfortunately we live in a time where a disturbingly large proportion of the population happily spread misinformation, distrust (real) experts, and fuel the flames of conspiracy despite overwhelming evidence.

If you delve into the unpleasant world of moon hoaxer groups you’ll see that the same set of claims crop up time after time. So, we’re going to take an express tour through their ‘top’ items – with your help!

Brian Eggo is most definitely NOT a rocket scientist. He is however the primary mouthpiece of Glasgow Skeptics, an occasional writer for The Skeptic, and he’s even got a degree in Engineering.

Livestreaming on twitch.tv/sitp at 7:00 pm GMT on the 10th February.