Francesca Stavrakopoulou’s talk has unfortunately had to be deferred due to circumstances outside of hers and our control. But she will be back in the New Year -so look out for announcements!

So, instead, the ever engaging Michael Marshall will be talking on a considerably topical subject. 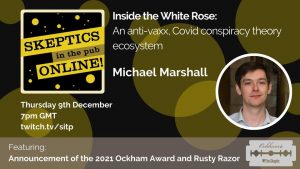 When 2020 brought with it a new strain of coronavirus, the world was plunged into confusion and uncertainty. While most people accepted the realities of the virus, little white stickers began to appear in public around the world claiming it was all a hoax. The graffiti was part of a co-ordinated grassroots campaign, urging members of the public to join their encrypted messaging channels…

So that’s what Michael Marshall, full-time skeptical investigator and activist, did.

Find out what months undercover in the messaging app Telegram showed Michael, and how the Covid crisis radicalised vaccine hesitant members of the public.

This week’s talk is a change to the originally-scheduled event, and will also feature the announcement of the 2021 Ockham Award and Rusty Razor.

Livestreaming on twitch.tv/sitp at 7:00 pm GMT on the 9th December.